Paul Newman as Butch Cassidy or Robert Redford as the Sundance Kid? 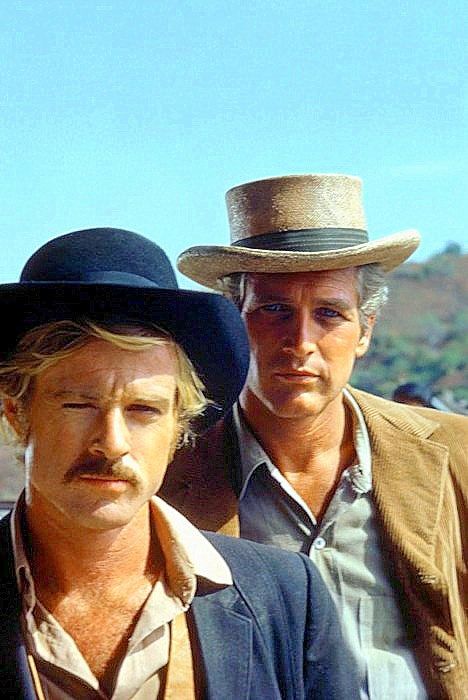 I’m part of an Online Book Club group. On Tuesdays, we take readers into our books, whatever that might mean. Today is my day, and I wrote about the inspiration behind the character Harlow Cassidy from my Magical Dressmaking mystery series.

After I finished the post, I decided I had to share it here with you, too, because I’m so curious to find out who’s a Paul Newman as Butch Cassidy fan vs. who is a Robert Redford as the Sundance Kid fan.

Random ideas just come to me sometimes, and I have to run with them. I think I’m probably not unique in this way, but who knows, maybe I am.

The random idea thing got me thinking about the moment I decided to make Harlow a descendant of the legendary Butch Cassidy. I’d already decided that Harlow would be her first name. It came to me and I loved it.  I had no idea about her last name, though. I started pairing Harlow with various surnames. That’s when Cassidy popped into my head. I liked the way they sounded together, and then I had this aha! moment. What if the Cassidy name came from Butch Cassidy’s lineage?

I got that tingly feeling that told me I was on to something. Of course, history tells us that Butch and Sundance died in Argentina before having children of their own. The beauty of fiction, though, is having the ability to create an alternate version of it to suit your needs. Which is just what I did. I gave Butch descendants.

Here’s the passage from the opening of Pleating For Mercy:

Rumors about the Cassidy women and their magic had long swirled through Bliss, Texas, like a gathering tornado. For 150 years, my family had managed to dodge most of the rumors, brushing off the idea that magic infused their handwork, and chalking up any unusual goings-on to coincidence.

But we all knew that the magic started the very day Butch Cassidy, my great-great-great-grandfather, turned his back to an ancient Argentinean fountain, dropped a gold coin into it, and made a wish. The Cassidy family legend says he asked for his firstborn child, and all who came after, to live a charmed life, the threads of good fortune, talent, and history flowing like magic from their fingertips.

That magic spilled through the female descendants of the Cassidy line into their handmade tapestries and homespun wool, crewel embroidery and perfectly pieced and stitched quilts. And into my dressmaking. It connected us to our history, and to one another.

His wish also gifted some of his descendants with their own special charms. Whatever Meemaw, my great-grandmother, wanted, she got. My grandmother Nana was a goat-whisperer. Mama’s green thumb could make anything grow…

I adore this series, Harlow, the whole family, and the Butch Cassidy connection.

That leads me back to my question: If you’ve seen the old movie, tell me…are you a Paul Newman fan as Butch, or do you lean toward Robert Redford as the Sundance Kid?

Email me with your choice!