“Like a patron tearing into one of Olaya’s olive-and-rosemary loaves, [Ivy] shows nothing but enthusiasm for the hunt…cozy fare in an artisanal wrapper.” –Kirkus Reviews

“In the latest Bread Shop mystery…Ivy Culpepper and her friends dig into the murder of the school-board president. … Ivy, a photographer and employee of Yeast of Eden bakery, is a perfect lead for a cozy series: engaging and kind but with a fierce streak of independence and an unshakable drive to find the truth. She’s quite a charming lady, and Archer’s books about her are charming, too—they’re gently told stories with good, solid mysteries as their centerpieces. … it’s the journey, not the destination, that makes this novel so much fun. Recommend to readers of Joanne Fluke and Diane Mott Davidson.” -Booklist

“I always enjoy spending time in Winnie Archer’s Santa Sofia, with its diverse, inclusive cast of characters and awareness of modern problems….Ms. Archer tackles the issues of racism and immigration, among others, with thoughtfulness and grace.” -Criminal Element

“This sixth in the series delves into very timely topics … Immigration, school district divisions, and the struggles for equitable financing all make for triggering subjects if not deftly handled. The author approaches these very thoughtfully and humanely, with the personal connections emphasizing the coldness of bureaucratic rules. Balancing out these weighty themes are the unique and always mouth-watering descriptions of Olaya’s elaborate creations.” -Kings River Life 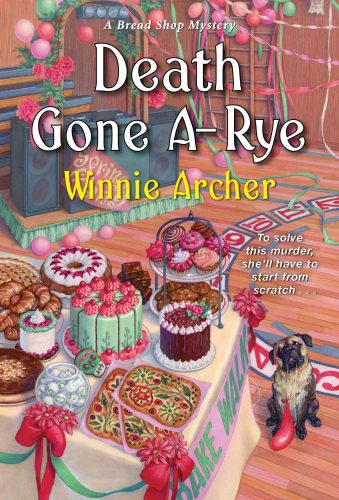 In the Northern California seaside town of Santa Sofia, a killer is trying to get a rise out of baker’s apprentice Ivy Culpepper . . .

Vincent van Dough focaccia is being touted on Instagram as the best thing since sliced bread. By strategically placing chives, olives, and yellow peppers to look like poppies and sunflowers, bakers create a mouthwatering masterpiece in the style of the great postimpressionist painter. At Yeast of Eden, where bread making has always been an art, they’re baking their own version for the school district’s Spring Fling. But one person won’t be tasting the Mexican bakery’s latest specialty. Ambitious school board president Nessa Renchrik has been murdered. Like the rest of this close-knit community, Ivy is shocked. But she’s just as surprised to discover her beau—restaurateur Miguel Baptista—had his own fling with Nessa back in the day and now the police have this half-baked notion he might have killed her. It’s up to Ivy, her boss Olaya Solis, and eighty-six-years-young Penelope Branford to separate the wheat from the chaff to determine who the real culprit is . . . INCLUDES RECIPES!