Twice I’ve been in the situation where a series I’ve written is finished and I kind of spin around, wondering what in the world I should write next.

The first time was after the first two Lola Cruz PI books were done and in the world. They were originally released in hard cover and didn’t sell all that well. This still floors me because I love Lola so, so much, and I think a broad audience for these books is out there. I had already written the third book, Bare-Naked Lola, but didn’t know if or when it would be published. I didn’t know what to do next.
I turned to my interests. My mom taught me to sew when I was in elementary school (props to her, because teaching sewing is not an easy thing to do. I tried with my daughter and ended up getting someone else to do the teaching—could be because Sophie is too stubborn to take instruction from me, but that’s a story for another day).

Fast-forward. I finished six books in that series, which I came to love SO much. Harlow Cassidy has my heart just as much as Lola Cruz does, Will Flores is just so…dreamy…and an alternate Butch Cassidy history? Yes, please.

Sadly, after book 6, though, the publisher didn’t choose to continue the series. Once again I was left to figure out: What next?

My agent put me in touch with an editor at Kensington who’d read my Lola Cruz book and loved them. She told me she’d always wanted to work with me. She and I talked several times and through these conversations, Ivy Culpepper and the bread shop mystery concept was born. Then Mercedes, my editor, got engaged and suddenly moved with her fiancé from NYC to Seattle, leaving Kensington and my series idea behind. Luckily it was picked up by a different editor, and we’re going strong. Book five released this fall. Book six, Death Gone a-Rye, releases in April ’21, and I’m wrapping up the writing of book seven, A Murder Yule Regret, right now,. I have at least one more to write in this series. Maybe more…who knows?! 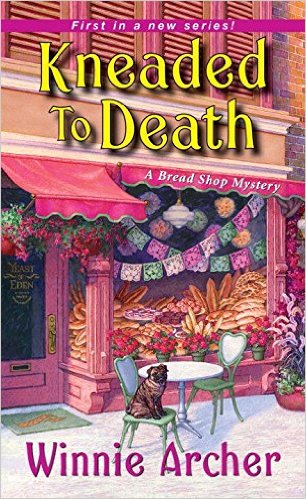 Kneaded to Death begins with Ivy Culpepper returning to her hometown of Santa Sofia, California, after the untimely death of her mother. In the midst of her grief, she takes a bread baking class from Olaya Solis, the owner of Yeast of Eden, the town’s artisan bread shop. Ivy is also a photographer, which factors in to the solving of several crimes throughout the series. I love so much about this series:

I could go on and on. There is a lot of me in Ivy…or a lot of Ivy in me. Kneaded to Death was the start of a new series and I’ve loved every minute writing it. It is also

Courtagonist’s December cozy book club book choice this month (time stamp 3:38!), so join her on December 16th to chat about it!
So. There you have it. A little Behind the Book about Kneaded to Death and how the Bread Shop mysteries came to be.
Happy reading, y’all!