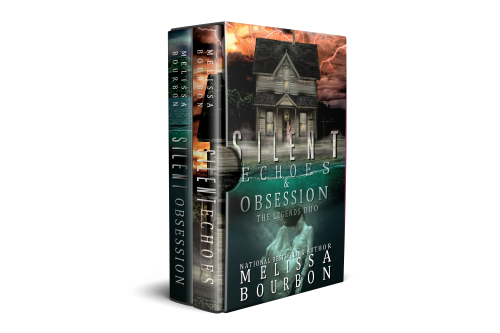 National Bestselling author Melissa Bourbon brings a dark twist to a Latin-American urban legend guaranteed to keep you up into the wee hours. With riveting suspense, a sigh-worthy romance with a heart-stopping hero, beautiful writing, and characters that jump off the page, this thrilling romantic suspense novel will have you believing in curses and ghosts…

Something deadly waits in the shadows…

On a Texas night twelve years ago, Vic Vargas kissed Delaney West so deeply that she almost came apart. Later that same night, evil crept into Delaney’s room as she slept – and everything in their world fell apart. Now Vic is a rancher living a half-empty life punctuated by one-night stands and a strained relationship with his 11-year-old son.

Then Delaney returns to San Julio, and the past comes rushing back… along with the silent echoes of that night so long ago. Livestock are dying. Some say coyote, but others whisper another darker word. Chupacabra. Bloodsucker.

The past hasn’t disappeared – nor has the instinctive desire that snaps and crackles between Delaney and Vic. And as those emotions ignite, so does the evil that hibernated for the last twelve years. The evil that waited for Delaney to return to San Julio… and to Vic Vargas.

Johanna Rios is a woman whose past has come back to haunt her.

The ghost of la Llorona is said to haunt the riverbanks, always searching for her drowned child. She also haunts high school teacher Johanna Rios, whose own mother believed so deeply in the legend she tried to drown her daughters. And now the ghost has become real, a young woman has been murdered, and the safe world Jo created is falling apart.

Since returning home from his last tour of duty to become a school principal, Ray Vargas has fought his attraction for his employee, the sensual woman who’d once been the girl next door. But the Llorona Killer will not stop until he claims his final victim–Johanna–and Ray will do anything to protect the woman he’s come to love.

With a serial killer out to prove the curse is real, will Ray and Johanna’s future be drowned in the ghostly waters of the past? Or will the power of their love give them the strength to stop a killer…and heal their wounded hearts…?